The United States Soccer Federation, commonly referred to as U.S. Soccer, is the official governing body of the sport of soccer in the United States. When they needed to increase their overall fan engagement, the came to Layer One 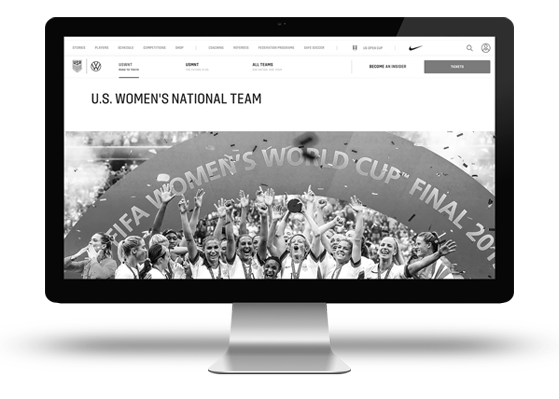 U.S. Soccer had undergone a large technology restructuring initiative that, while accomplishing some goals, left many partially incomplete and not up to their high standards. As part of an RFP process, Layer One competed for improvement and support work, winning due to their focus on deep technical expertise, iterative delivery process and focus on frequent communications.

Layer One quickly narrowed in on a couple key improvement areas; including site stability and the content editing experience. Over the first few months of the engagement, downtime significantly decreased as a result of bug removal and overall performance improvements. Changes were also introduced for the content editor that allowed site changes to be enacted with less clicks and errors. Since this time, Layer One has improved numerous parts of the fan experience including U.S. Soccer’s Insider program. This has allowed for a significant increase in revenue, brand loyalty and overall passion for the sport.

Their work has significantly decreased downtime on the site. We used to run into bugs that crashed the site. That no longer happens. ... We appreciate that they don’t bend to each of our requests. If they need to push back on our decision-making, they’re ready to do so. Having a high level of direct communication and transparency has been very beneficial to us.